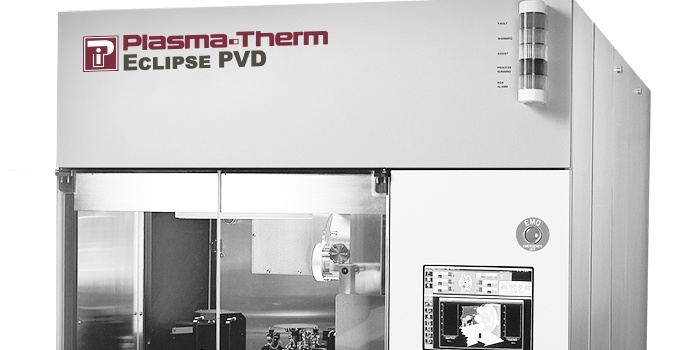 If you are looking for a Physical Vapor Deposition (PVD) process with low particle sputtering, high throughput and low maintenance downtime, look no further than the Eclipse Mark IV, now offered by Plasma-Therm.

What is the MRC Eclipse Mark IV PVD System?

The Eclipse Mark IV PVD system is a 4th generation, reliable and repeatable method of depositing uniform coatings onto silicon and gallium arsenide wafers. It is ideal for placing interconnects, diffusion barrier layers, silicide contact layers, and bump and backside coatings. It can also be used to create discrete components, such as capacitors and resistors.

Why use an Eclipse System?

The Mark IV builds on the previous generations of Eclipse PVD systems, with improved process control and monitoring. Processing is performed in isolated chambers under an ultra-high vacuum (UHV) to minimize contamination and increase uniformity in deposition across the wafer surface, as well as minimize variation in wafer-to-wafer deposition.

The Eclipse systems have high throughput and high uptimes, meaning a quicker Return On Investment (ROI) and less time spent maintaining the machines. Besides depositing layers on the front side of the wafers, wafers are oriented vertically during processing, making possible backside coatings and bumps for electronics packaging, all on the same machine. This saves processing time, space and effort, as well as reduces contamination, if steps are performed sequentially (without breaking vacuum). Wafers are serially indexed during processing so that any quality excursion can be quickly tracked.

Eclipse systems occupy a small footprint compared to other PVD systems. This means that less of the cleanroom floor is occupied by the Eclipse system, leaving more room for additional processing equipment. A complete measure of ROI accounts for how much cleanroom space is occupied by machine footprints, and therefore, the Mark IV helps you realize your ROI quickly.

This new controller uses an incredibly stable Linux-based workstation and integrates all of the capability of the previous controller into one system, reducing the controller’s footprint and enhancing both the stability and the speed of processing. Instead of the VME, the Epoch uses a PCI that accepts standard Industry Pack (IP) modules. Ribbon cables are used to connect all of the necessary hardware, just like on the original controllers.

In terms of software, the Epoch Controller shows an easy-to-use Graphical User Interface (GUI) that maps the entire process visually and in clear labels on the screen. The main screen shows an animated process flow diagram so that even the newest technician can quickly understand the PVD process and wafer flow through the machine.  If there is a processing issue, it can be quickly identified and remedied.

Recipe creation and modification can be performed easily. Furthermore, the controller has a built-in simulation mode for determining how a recipe change will impact deposition, all before placing a product in the chamber.

The advanced controller reduces downtime by seamlessly integrating all of the necessary hardware and software into one compact, stable package. The end result:  29% higher throughput in terms of wafers per hour.

The Eclipse Mark II PVD system is a popular choice for deposition of contact layers, interconnects, barrier layers, bumps and backside coating on silicon and gallium-arsenide wafers up to 200 mm in diameter. Just like the Mark IV, it features a small footprint, high throughput and uptime.

A number of upgrades are available for the Eclipse Mark II PVD system, such as an advanced controller system. The control system upgrade is accessible through an easy-to-use software interface, which is used for process monitoring and recipe creation. Built into the system is a high-fidelity simulation mode for predicting how a process change will impact the deposition.

This controller, and other time and money-saving upgrades can be retrofitted on the Eclipse Mark II PVD system. Plasma-Therm will also supply replacement parts and upgrades to keep your Mark II running smoothly.

The Eclipse Mark IV PVD system offers uniform deposition for interconnects, contact and barrier layers, while providing high throughput and uptime in a small space. With the available Epoch controller, which comes standard on all new Mark IV systems, and can be retrofitted onto existing systems, throughput is increased, while downtime and controller footprint are decreased. Their easy-to-use software allows for quick and easy recipe creation and modification, as well as a powerful simulation mode for ensuring high-quality coatings before running product.

During the processing of nearly all solid-state electronics, there is an etching step utilizing ...
Read More