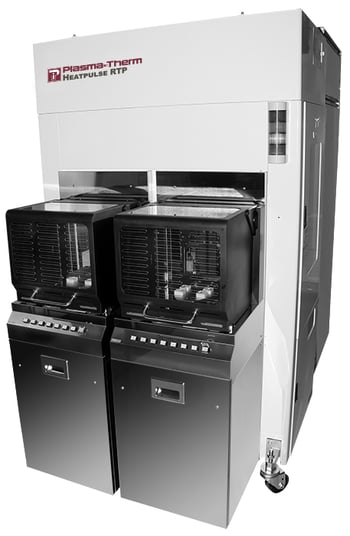 The AG Heatpulse RPT is a low-cost Rapid Thermal Processing solution for advanced processing of substrates up to 200mm. It is suitable for silicon wafers or wafers made from exotic materials in a laboratory setting.

RTP can take a silicon wafer up to high temperature in a matter of seconds, then cool it without causing the wafers to fracture. RTP allows multiple semiconductor processing steps to be performed at once, while simultaneously controlling dopant diffusion. Common processing steps that benefit from RTP include controlled diffusion, annealing, deposition, and oxide growth.

Heating is performed with two arrays of tungsten lamps, and temperature is measured with thermocouples or a pyrometer in a closed-loop system. Rapid cooling is performed through a cold-wall type heat exchanger. The closed-loop temperature control allows the researcher or process engineer to precisely fine-tune the system for increased yield and decreased reprocessing or waste.

Maintenance and downtime are minimized through the use of carefully-placed access panels. Routine maintenance can be performed through these access panels without a major disassembly project or moving the system. It runs on a standard 208 V line, meaning lockout and arc flash safety hazards are reduced, speeding up maintenance time.

Furthermore, the system does not use belts or pulleys for its drive systems. Belts wear, generating particles that could directly contaminate the wafers. Also, any belt particles that are exposed to the heat may outgas or burn, potentially vapor depositing contaminants on the wafers. The switch away from belts drastically reduces contamination.

Why Use an AG Heatpulse?

Wafers are processed individually with tight temperature control in a closed-loop system with mass flow controllers on all gas lines and programmable temperature steps. All of the controls can be accessed through an intuitive Graphical User Interface (GUI). Automatic control robotically feeds the wafers into the oven from a standard cassette and can have a throughput of up to 80 wafers an hour. The oven can be configured for silicon wafers or for exotic semiconductor materials, increasing the confidence in experimental procedures and new research. Repeatability between runs due to the tight process control and the high throughput yield increases while scrap and reprocessing are minimized.

The processing temperature of the oven can be tightly controlled using the Digital Temperature Controller (DTC) and feedback from a pyrometer. The system has redundancy built-in, ensuring that the temperature is accurately measured at all times. The ramp rates can be set from 0-180 °C per second, giving the researcher or process engineer many options for optimization. Even with the high speeds, the repeatability between runs is within 3 °C, up to 1150 °C. Across a 200 mm wafer, the variability is only 5 °C, meaning heating is even. Oxide layers are uniform and predictable across the entire wafer, meaning die-to-die variability is minimized.

Upgrade Ability for Extended Use

The AG Heatpulse line can be upgraded with multiple additions to increase its versatility in production or in research use. In particular, the AG Heatpulse 8800/8108 will accept a nitrogen (N2) curtain and an in-situ oxygen monitor, both of which help reduce scrapped wafers and reduce man and machine hours.

A few of the integrated applications made possible with this system are implant activation and annealing steps, thermal oxidation and nitridation, low dielectric constant annealing, as well as metal silicidation steps. In particular, titanium, cobalt, and nickel can undergo this silicidation process. Different wafer types, such as silicon, gallium arsenide, and various compound wafers can be processed using the same system.

What Upgrades are Available?

A few key upgrades can reduce contamination in the system.

One optional upgrade is a nitrogen (N2) curtain, which reduces the introduction of contaminants and oxygen into the processing chamber. The N2 curtain protects wafers as they move from the cassette into the chamber and out again. It is placed between the oven and load door to prevent “backflow” of oxygen into the chamber.

The N2 curtain is made from welded gas lines for long life, virtually no sources of leakage, and minimal fittings. The nitrogen gas is fed through a dedicated mass flow controller into a flange attachment that releases the gas evenly across the oven door at a high flow rate. To increase throughput, there is a pre-load purge cycle to prepare for wafer loading.

During metal RTD steps, any oxygen present in the chamber may oxidize the metal, forming an insulating layer instead of a conductive one. Oxidation is hard to remove and often leads to wafer scrap. To prevent this, many companies and research facilities run a test or monitor wafer through the chamber to detect the oxygen present before running product wafers.

The optional in-situ oxygen monitor can be used to detect oxygen levels as low as 10 parts per million (PPM) in the chamber. This monitor can respond in less than 10 seconds. The addition of the monitor reduces scrapped wafers significantly, and virtually eliminates the need for test wafers, reducing man and machine hours spent running and reprocessing test wafers.

If you are looking for a Physical Vapor Deposition (PVD) process with low particle sputtering,...
Read More