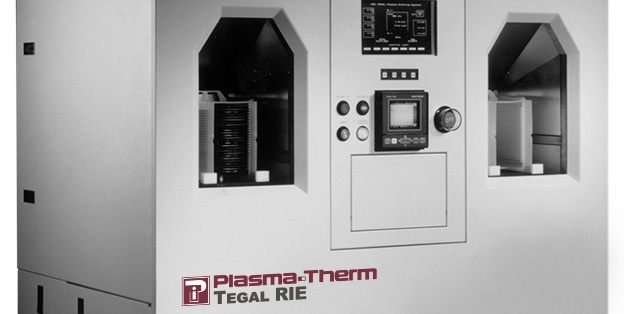 Photoresist trimming operations can also improve the throughput of the facility by reducing the dimensions of photoresist beyond that achievable by lithography alone. This means smaller features can be created reliably, meaning higher yield and less time spent in rework.

What are the capabilities of each Tegal etch system? 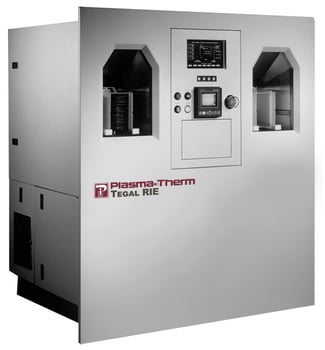 The Tegal 901ACS and 903ACS systems are well-suited for semiconductor processing of silicon, but also for gallium-arsenide (Ga-As), indium-phosphide (In-P) and silicon-germanium (Si-Ge) substrates. They can plasma etch a variety of materials, including silicon dioxide, silicon nitride, and silicon carbide. They are versatile, capable of handling 75 mm, 100 mm, 125 mm, and 150 mm diameter wafers, as well as 4-inch square wafers, including thinned, insulating and transparent materials. Features down to 1 micron can be etched using these systems.

The 901ACS is a wide-gap diode reactor system. It is particularly suited for low-temperature plasma etch operations, geared towards etching delicate materials, such as organics and easily-damaged coatings and devices, without the use of clamps or electrostatic mechanisms for wafer manipulation. The 903ACS is a narrow gap diode reactor system, making it ideal for tightly-controlled, anisotropic etching of silicon dioxide and silicon nitride insulating layers.

The Tegal 981ACS is a scaled-up version of the 901ACS, specifically built to handle 150 mm and 200 mm diameter wafers, as well as 100 mm square wafers and 6-inch square wafers for non-critical photoresist removal, photoresist trimming, and large-scale etching operations. The 981ACS can be used for planarization operations and backside etching, all of which require etching over a very large area.

The Tegal 981ACS is similar to the 901ACS, but with some expanded capabilities. It has all of the same familiar features: a small footprint, an intuitive, touchscreen interface, and long-lasting, low maintenance parts. The 981ACS is also commonly used for BioChip nanotechnology applications.

The Tegal 6500 HRe- Dual Frequency Etch System hosts a cluster of plasma etching tools, which can be configured with one or two etching chambers. All 6500 series systems can be programmed to perform serial or parallel wafer processing from single or dual loading ports, depending on the configuration and application. This system uses dual-frequencies for high-density, capacitively coupled plasma (CCP) generation and magnetic plasma confinement. All of this allows for very precise plasma control, meaning etching can be performed down to the sub-micron level.

Tegal 6500 series etching systems are available in several varieties. The 6510 is capable of performing gate etching operations in polysilicon, as well as shallow trench isolation (STI) operations. Designed for precise etching, it can etch features as small as 90 nm on nitride and oxide hard masks.

The Tegal 6520 can perform etching of aluminum alloys down to the sub-micron level. This system comes standard with a rinse-strip-rinse (RSR) procedure, which removes contamination due to corrosion that can be left behind during etching operations of aluminum or steel. Because of RSR, the 6520 is especially useful for etching aluminum alloy interconnects and metallization layers, as it can anisotropically etch thick layers (> 2 microns).

The Tegal 6540 is designed for etching high dielectric coefficient materials (high-K), often used in capacitors, platinum and iridium electrodes, gold interconnects, and other difficult-to-etch materials. This includes lead-zirconate-titanate (PZT), strontium-bismuth-tantalate (SBT), and barium-strontium-titanate (BST), which are often difficult to etch. Features as small as 90 nm can be etched with this system, making it popular amongst manufacturers who produce high-density, high capacity DRAM and embedded memory devices, as well as non-volatile Ferroelectric Random Access Memory (FeRAM) devices.

What are the benefits of Tegal diode etch systems?

The Tegal series etch systems offer a small footprint on the factory floor, freeing up space for other equipment and maintenance tasks. The 901ACS, 903ACS, and 981ACS have no external rack-mount electronics, and the 6500 series only has one rack-mounted device.

In terms of maintenance, these systems are easily maintained, with low-cost, yet long-lasting consumables and a minimal operating cost. The long-lasting components mean increased uptime and higher system throughput.

The Tegal Diode RIE systems are a way to boost production by reducing load on critical etching equipment. They can handle large wafer etching operations, such as backside etching and planarization, but can also handle finer etching details down to 1 micron. The low cost of operation and small footprint make them suitable for virtually any semiconductor fabrication facility.

The Tegal Diode RIE systems are only available through Plasma-Therm. To learn more, contact Plasma-Therm today.

How to Factor Etch System Upgrades into ROI Calculations

The bottom line of an etching operation depends on so much more than simply the initial cost of...
Read More

During the processing of nearly all solid-state electronics, there is an etching step utilizing ...
Read More